One of the cutest holidays of the year, the International Cat Day takes place every year on August 8.  It should come as no surprise Russians celebrate this occasion, as they are among the biggest cat lovers in the world! In fact, according to a Dalia Research survey, 59% of the Russian respondents declared to have at least one cat. Keep reading to find out where you are most likely to meet one of these lovely furry inhabitants of Saint Petersburg!

One of the cutest holidays of the year, the International Cat Day takes place every year on August 8. It was established in 2002 by the International Fund for Animal Welfare to raise awareness for our feline friends and learn about ways to help and protect them.
Although most countries now observe this unofficial holiday on August 8th, Russia celebrates its National Cat Day of March 1st. It should come as no surprise Russians have their own national Cat Day, as they are among the biggest cat lovers in the world! In fact, according to a Dalia Research survey, 59% of the Russian respondents declared to have at least one cat.

But felines have a long history in Russia: they have been here since the 18thcentury, when, tired of rodents running around the palace, Empress Elizabeth sent out a decree that the best mice hunting mice cats in Russia be sent to the imperial court in Saint Petersburg. The first to arrive are thought to have come from the city of Kazan, at the time famous for the incredible rat-catching skills of its cats.
The cats survived the Napoleonic wars and lived through the 1917 Revolution. They only disappeared during World War II, when Hitler’s armies attacked Saint Petersburg, then known as Leningrad.

However, not long after the events of the war, a new generation of cats was welcomed in Saint Petersburg, as the mice population in the city had increased once again.
They have lived in Saint Petersburg ever since, but they are no longer needed for their ability to catch rats (poison has relieved them of that task). Now they come seeking shelter from the cold Russian winters and the Hermitage Museum is more than glad to provide them protection and help them find new homes.
In fact, not only does the Museum adopt and care for cats needing homes, but they also recently set up a website for people who may be interested in adopting one of those cats, which would be a great honor for the lucky owner. 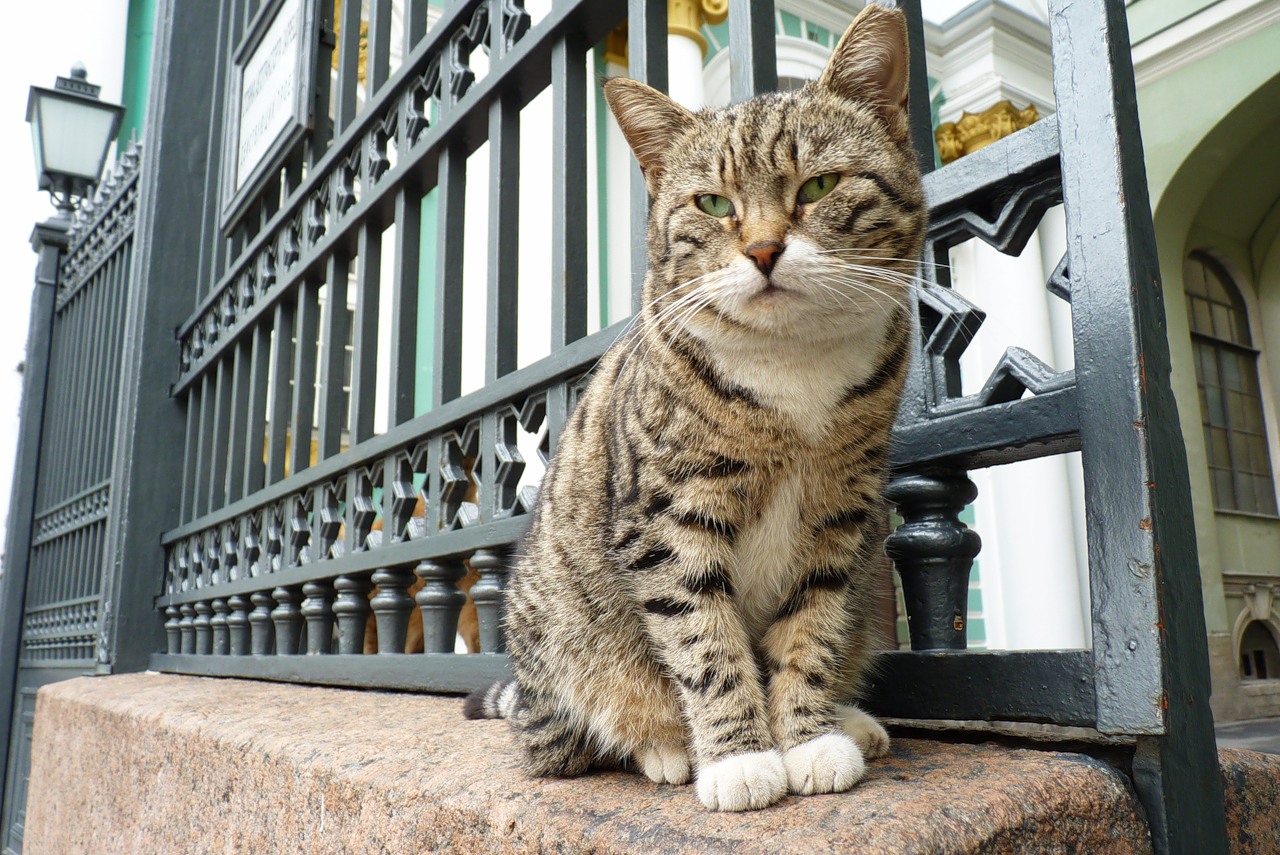 Nevertheless, for the over 70 cats living on the museum grounds, life is pretty sweet: they have their own press secretary, Maria Khaltunen, three official caretakers, special kitchens specifically preparing their favorite food and even a small hospital. They live in the basements and are not allowed in the galleries, but they can often be spot among the statues in the gardens and courtyards, on the embankment and on the square during summertime. The cats do enjoy some cuddles and it’s not rare to see one or two sneak out and lounge across one of the book-keepers’ desks and curl up to take a nap in their laps or in open boxes of printer paper.
So, if you are in Saint Petersburg and are planning to visit the Hermitage Museum, make sure to keep your eyes open and you might spot one of the furry inhabitants of the Winter Palace!

However, if you are a true cat lover and just cannot stay away from them, I have just the place for you! Along the Fontanka Embankment you will find a lovely anti-café, the “Soulmate Kotokafé”, where you’ll be able to spend as much time as you want with some of the cutest cats you’ll ever see. There you will find everything to make you feel at home, including cozy couches, hot tea, sweets and relaxing music, while cuddling and playing with the sweetest and most friendly kittens out there!