Cities are great and all but sometimes you want you want to get a little bit closer to nature. For all its strengths St. Petersburg`s streets can often seem overly devoid of anything green and growing. Fortunately it has plenty of amazing parks to make up for it.

Regardless of whether you`ve been to St Petersburg before or not, you`ve almost certainly heard of Летный сад (the Summer Garden). Whereas many of the parks on this list are nice places to relax after running around from one tourist attraction to the other, the Summer Garden is itself one of the city`s main tourist attractions. The construction of the Summer Gardens was ordered in 1704 by Peter the Great, who played a considerable role in planning its design. The park is the epitome of a formal garden; all of its many lawns, pathways, hedges, and trees are all laid out according to a strict geometric pattern and are kept well trimmed. You won`t find anything growing wild and free here. In amongst the natural beauty of the park you`ll also find a few purely man made delights. Along the Summer Garden`s main path you`ll see beautiful fountains attended by an entourage of classically styled statues. Along the side of the park you`ll find yet more fountains and statues with some exquisite flower beds thrown in for good measure. The north western corner of the garden contains one of its most impressive structures, the recently restored Summer Palace of Peter the Great. Step inside this building to find out a little more about the history of the garden, the city around it, and the man who envisioned them both. If your goal is to relax then the summer garden has plenty to offer. Though the garden has relatively few benches (and sitting on the grass is not allowed!) there are at least two tea rooms in the garden if you want to stop for bite to eat or to grab a drink. For those you want to keep on walking, ice cream stands are placed at pleasingly regular intervals around the garden. There`s also a good chance that your visit to the gardens will have its own accompanying soundtrack, provided courtesy of the street musicians that sometimes play there.

If you`re looking for a more informal, natural place to relax in the centre then another option is Михайловский сад (Mikhailovskii Garden), which is located right next to Спас на Крови (the Church of the Saviour on Spilled Blood). Whilst the ornate wrought-iron gates at its entrance might make you think otherwise, Mikhailovskii Park is far more informal than the Summer Garden design-wise. That said, it is far from wild; if you imagine the Summer Garden as wearing a three piece suit, mikhailovskii park at least has its shirt untucked. There are plenty of benches dotted around the park and it`s located right between two major attractions, the aforementioned Church of the Saviour and Михайловский Дворец (Mikhailovskii Palace). There`s also several other interesting spots nearby, like the Russian Museum, the house of Books and, strangely enough, the Museum of Soviet Arcade Games. All this makes it an ideal place to take a quick break whilst looking around the centre.

Тварический сад (the Tauride Garden) is a little bit further away from the institute. To get there quickly you`re best off taking the metro to the station Чернишевская (Chernishevskaya) and then walking from there. The station is on the red line, so it`s relatively easy to get to from Текнологический Институт (Technologicheskii Insitute). The garden is a popular but relaxing place. When the weather is nice you`ll find plenty of locals hanging out of the grass, chatting, sunbathing, and sometimes even taking part in outdoor yoga lessons. 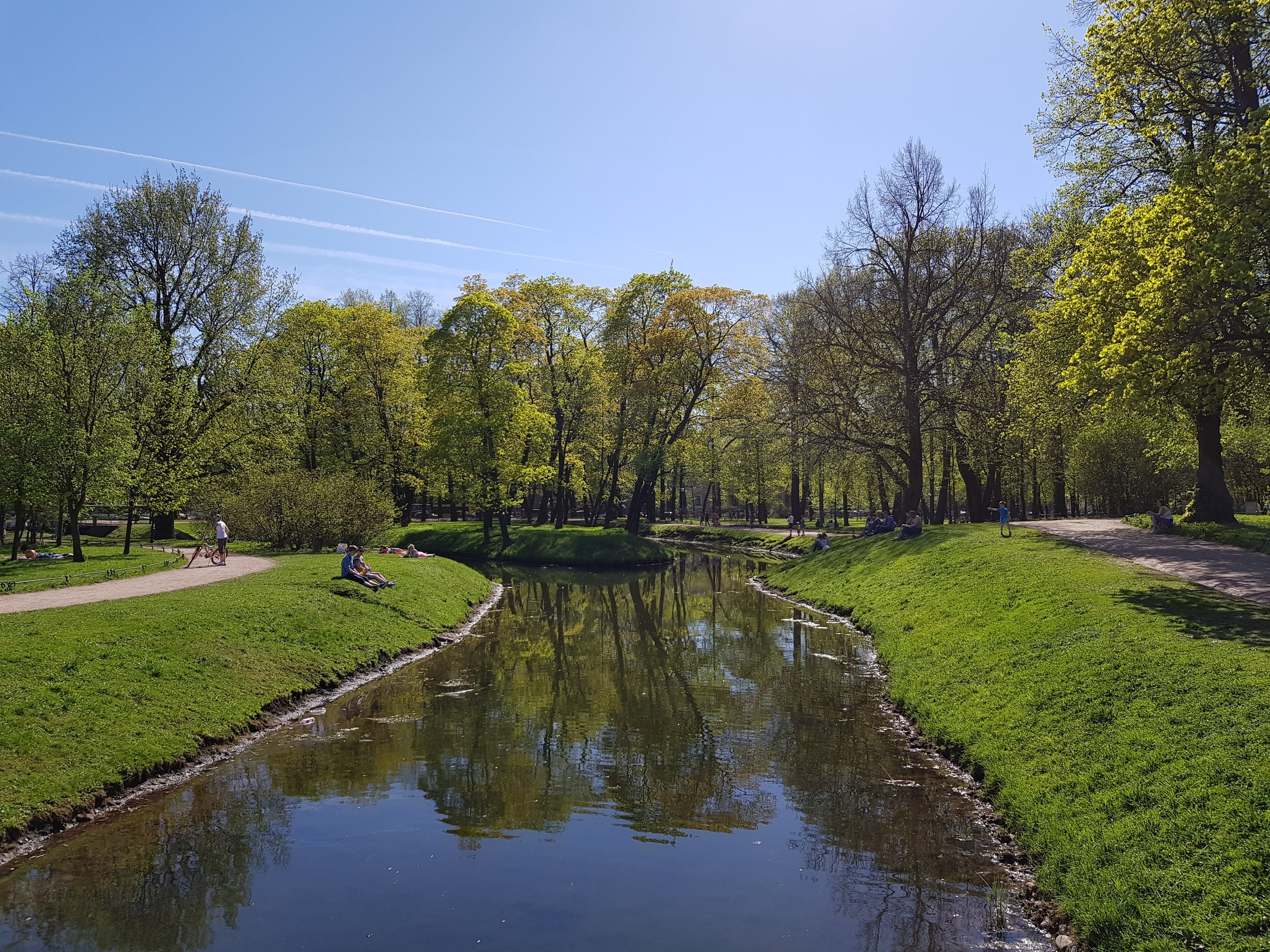 One of the park`s main features is a huge lake, which offers a great view over Таврический Дворец (the Tauride Palace), which was the seat of the Russian provisional government after the February Revolution. If you`re interested in the October Revolution then it`s well worth heading a little way down the road. About 15 minutes away you`ll find Смольный Собор (the Smolnii Cathedral) and Смольный Институт (the Smolnii Institute). The latter of these was used as the main headquarters of the Soviet Government in the period immediately following the October Revolution and now serves as the seat of St. Petersburg`s City Government. It also houses the Museum of Lenin. 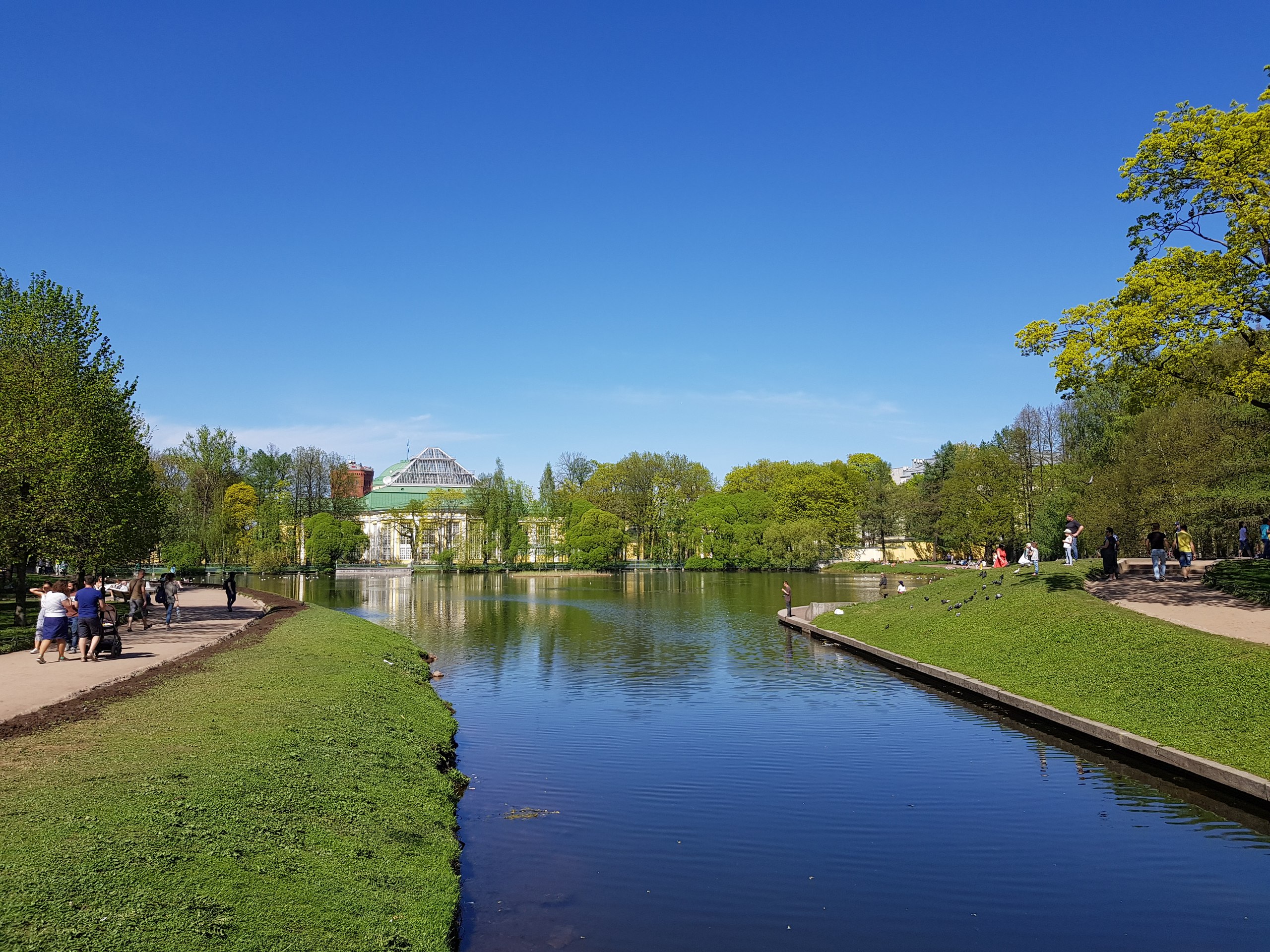 Next up is another park which is right on top one of St Petersburg`s many historical sites. In fact this one is right next to the most historical location in St Ptersburg. Александровский парк (Aleksandrovskiy Park) is located on the northern bank of the River Neva, just behind Петрапавловская крепость (the Peter and Paul Fortress). The fortress was the first building to be constructed in St Petersburg, making it the foundation block of the city. It played an important role in many of the most transformative events in Russian history. You`ll soon be able to read more about the fortress in another blog post, but for now let`s turn our attention to the park nearby. First of all it`s super easy to get to. Just take the metro to the blue line station горковская (Gorkovskaya) and as soon as you leave the station, walk forward about ten metres and you`ll be in the park.

This is another relatively relaxed park, there`s no problem if you want to sit on the grass here, but should you want a proper seat, then you might want to check out Большой кофе (Big Coffee). This little cafe is hidden right in the centre of the park and sells fantastically tasty coffee and snacks. There`s not a whole bunch of seating inside, but there`s a fair big seating area outside with a small fountain and a little stream running from it. It`s a wonderful place to sit and watch the world go by. 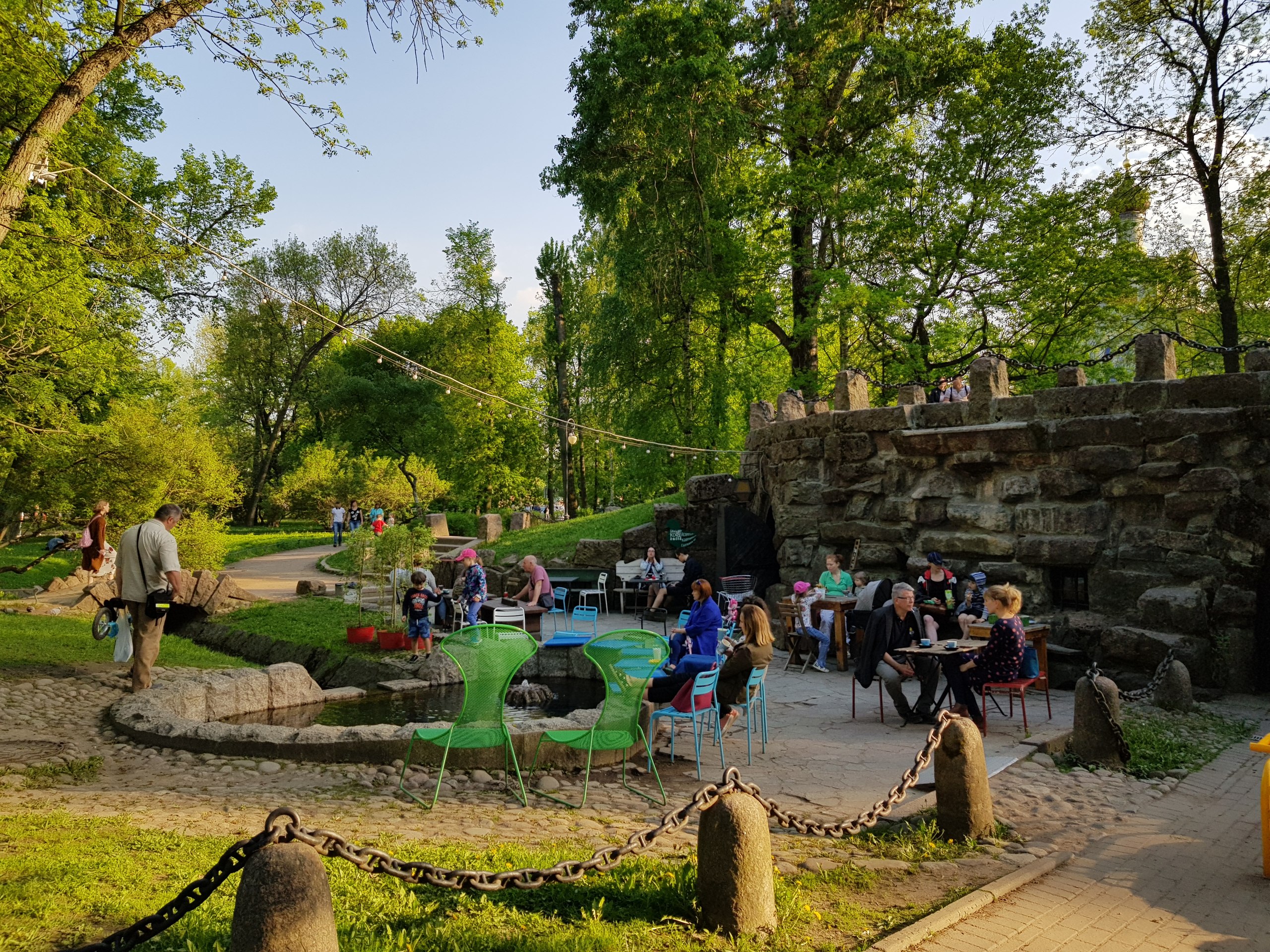 As you walk around the park you may stumble across a small square with detailed models of St Petersburg`s main tourist attractions. If you look closely you`ll actually see that the ground is a map of the city. Unfortunately, it`s unlikely that you`ll be able to get inside for a closer look; this part of the park is fenced off and usually closed to the public. 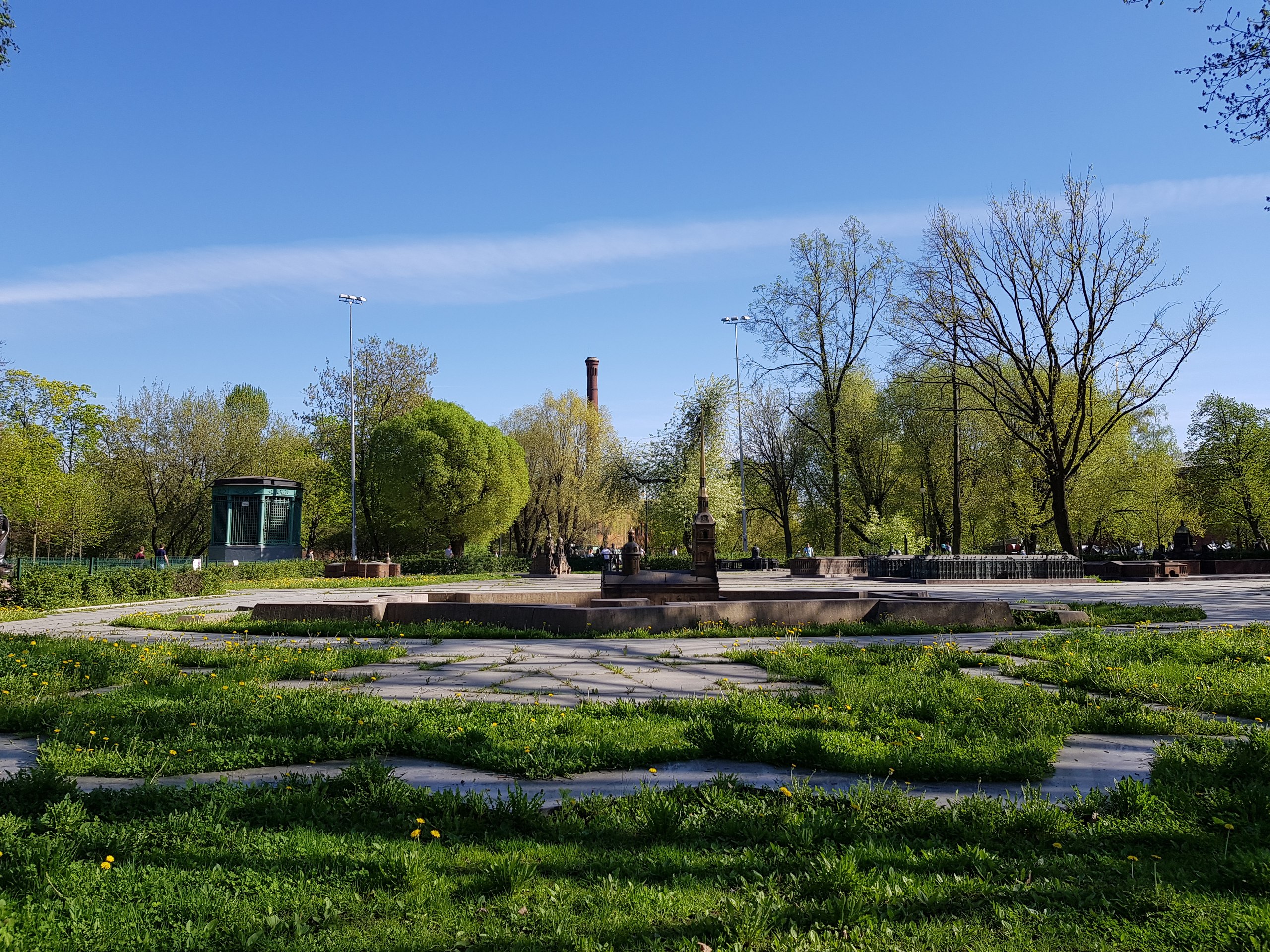 Елагин Остров (Elagin Island), as the name suggests, is a little bit more than just a park. This island-park is separated from the rest of St Petersburg by two sub-tributaries of the Neva river. There are no roads on the island and precious few vehicles – only those that are necessary for the maintenance of the park. As a result, Elagin Island is pretty much completely isolated from the noise and dust of the surrounding city, so if you`re looking for somewhere peaceful and relaxing, then Elagin should be one of you first ports of call. On the island you`ll find both a huge park and Елагиноостровский дворец-музей (the Elagin Island Palace Museum). In addition, if you visit relatively soon, you may be able to catch a glimpse of the flower displays created for the recently held Festival of Tulips. The only problem with Elgain Island is its location. You`ll have to go pretty far to the north of the city to get there. Normally the easiest way is to take the metro to Станции “Крестовский Остров” (Krestovsky Ostrov Station) and then to walk north and cross over a bridge to the island. Unfortunately that bridge is currently closed (accurate 22.05.2018), so anyone who wants to visit Elagin at the moment is better off staying on the metro to the next stop, Старая Деревня (Staraya Derevnya) and then crossing to the island over the bridge located south of that metro station. Did you know that the Derzhavin Institute is actually spread across tow buildings? Most students only ever see the red brick building on Troitskii Pereulok but there are also classrooms in another building on the banks of the Fontanka reiver, the decidedly yellow, former mansion of Gavrilla Derzhavin. Just behind this building is a park. You`ll see in marked on maps as Польский сад (Polish Garden) but it`s also known as Усадебный Сад Г. Р. Державина (the Manor Garden of G. R. Derzhavin) or simply Державинский сад (Derzhavinskii Garden). The latter two names are understandable, the park backs onto Derzhavin`s mansion and previously belonged to him, but why then is the park called Polish Garden? Simple, it also backs onto a Polish Catholic Church. 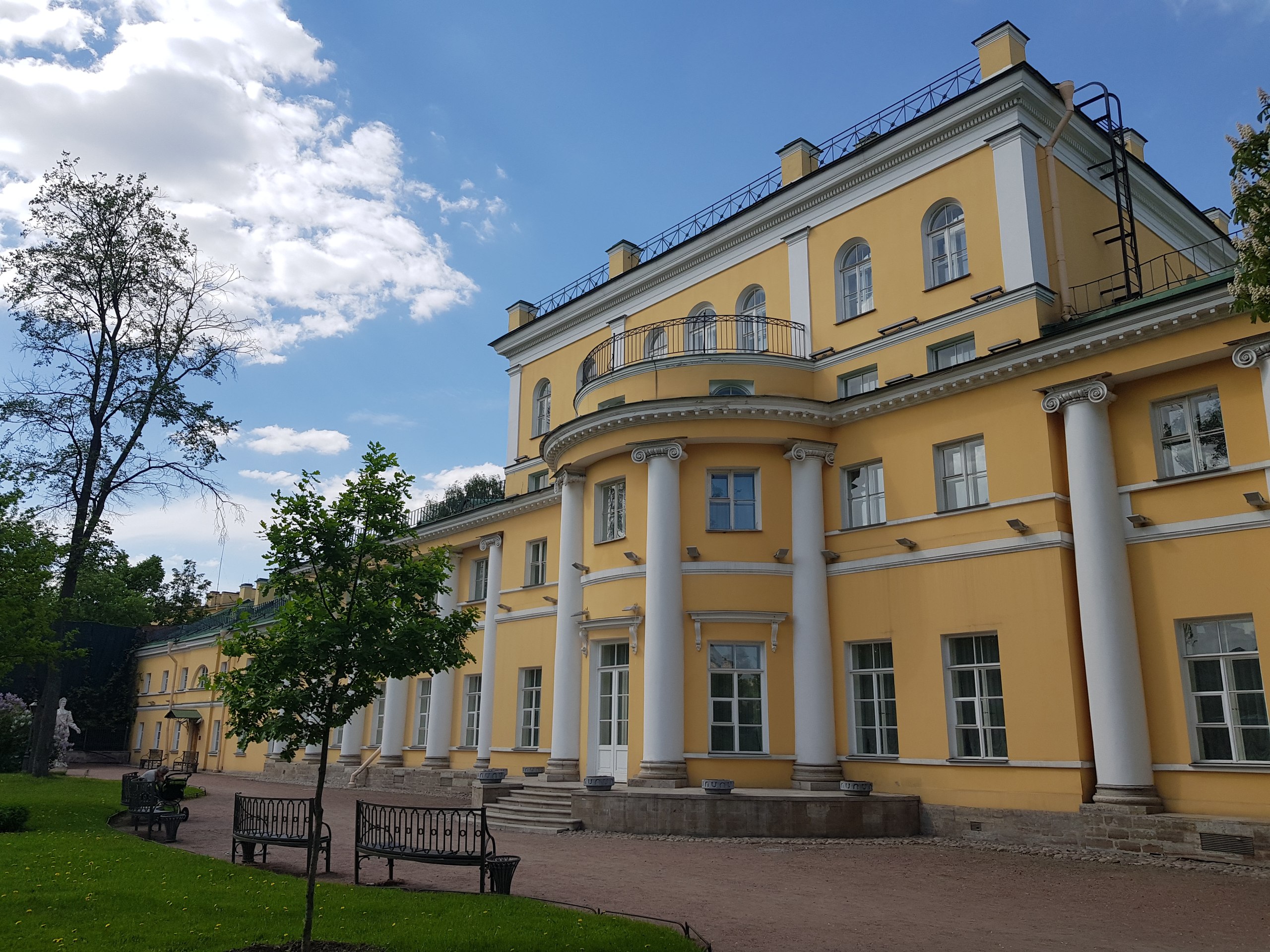 Unlike the other parks on this list, entry to Derzhavinskii/Polish Garden is not free. That`s not to say it`s expensive however, a single ticket costs only 60 roubles and lasts all day. The upside to this minor fee is that it is extremely rare for the park to be over-crowded. In fact it`s far more likely that you`ll find the park under-crowded; there are so many benches and other places to sit and relax that, with so few people there, you`ll be entirely spoilt for choice. 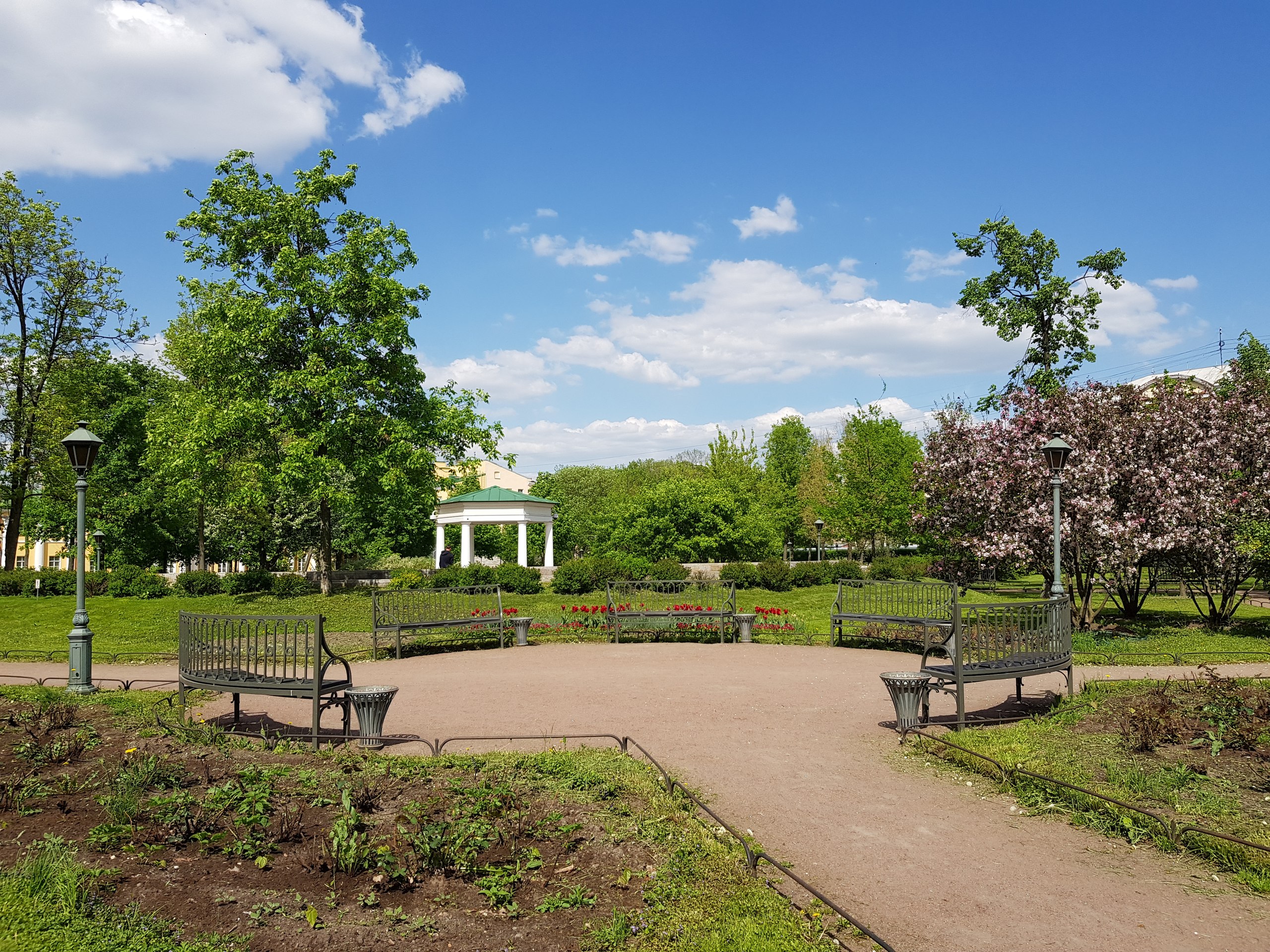 Everything about the garden, from the little stream that runs through it, to the gazebos dotted around, radiates a pleasant charm. If you want to know what it would be like to be a Russian noble with your own private garden, this is the best place to go.

Further north from the Institute on the northern side of the Fontanka River you`ll find Юсуповский сад (Yusupovskii Garden). If you haven`t signed up for any additional after-lunch modules, then it can be a great place to have lunch. It`s just down the road from Сенная Площадь (Sennaya Ploschad`) so you`ll have plenty of options for food nearby. The centre of the park is dominated by a huge lake. Sometimes you`ll see people fishing there, but, even if you`re not planning to land the catch of the day, you`ll find it difficult to think of a better place to chill out than down by the edge of the water in Yusupovskii. 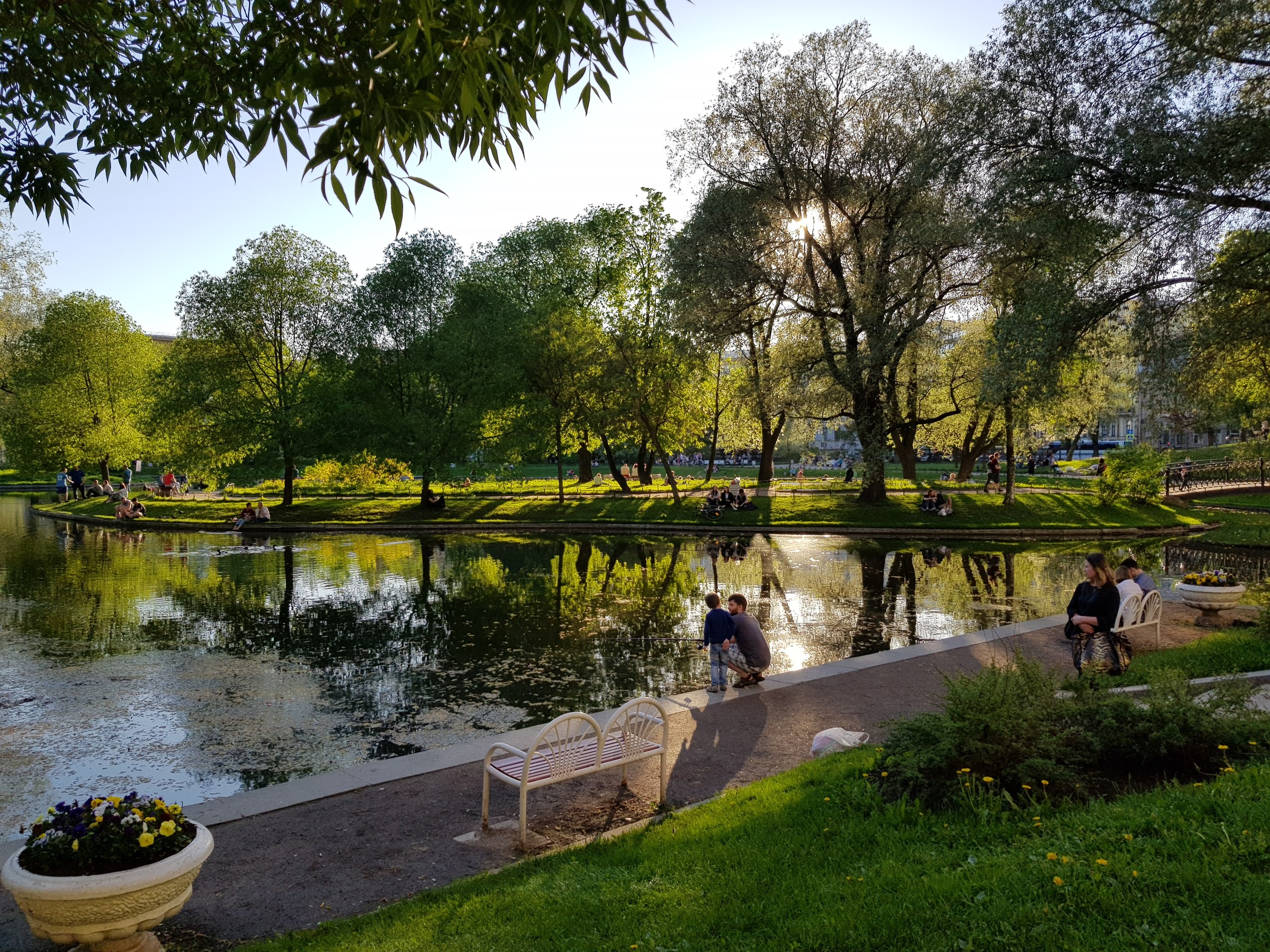 As with all the parks on this list, when sitting in Yusuposkii, you`re not far away from one of St Petersburg`s many historic spots. The park backs onto Юсуповский Дворец (Yusupovskii Palace), which was the site of Rasputin`s murder. Just don`t let that put you off your lunch. 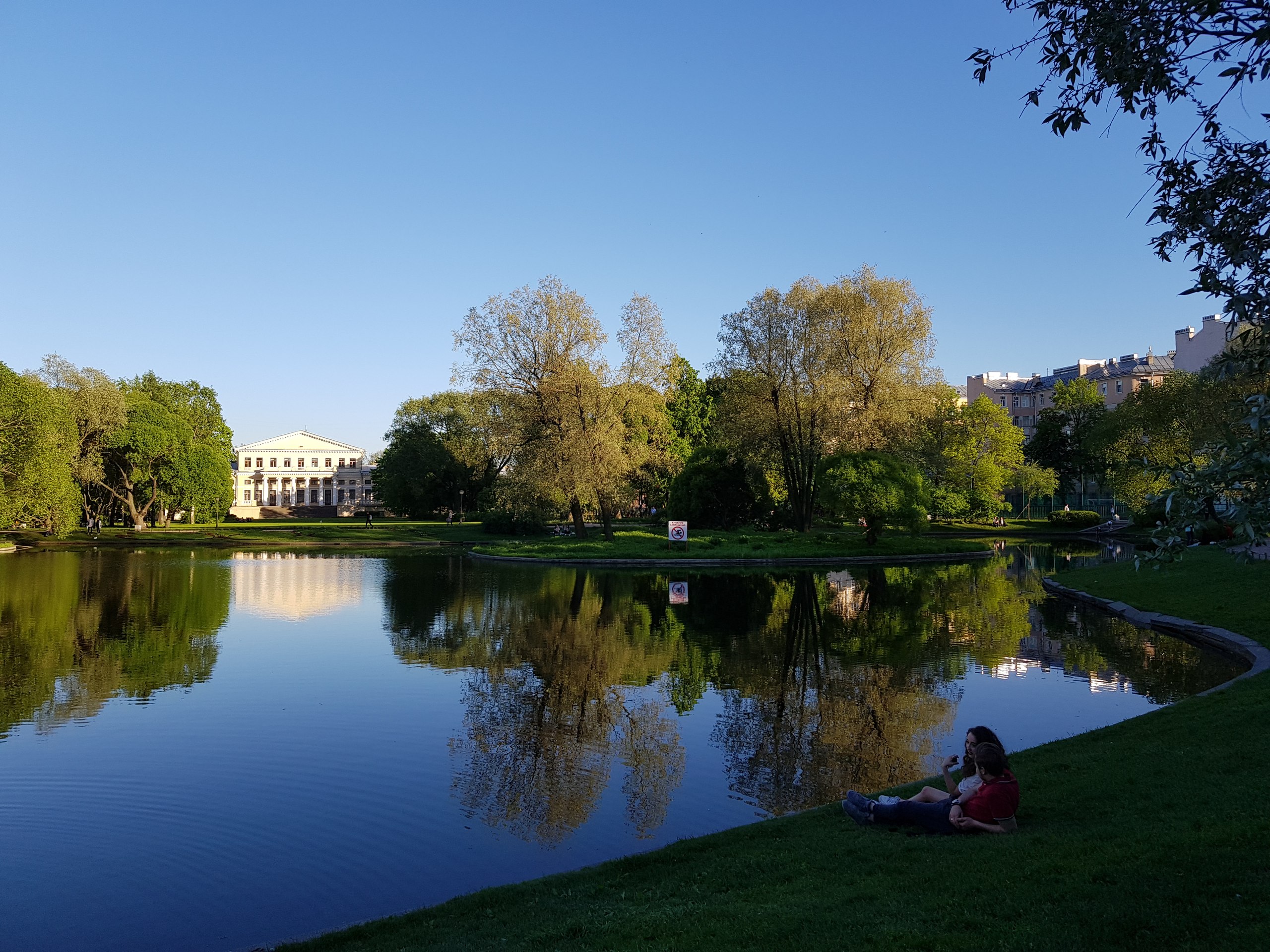