And where were you on Navy day?

Sunday July 31st was a special day for St Petersburg. It was Russian Navy Day (День военно-морского флота). This of course is an important holiday in many places in Russia, but for St Petersburg, as the hometown of the Baltic Fleet and the birthplace of the Russian Navy, it has a certain extra importance. During the week prior to the big day I`d done a bit of research into the events that would be happening and had agreed with some friends from the institute and a Russian friend of mine, to meet up in the town centre and enjoy the festivities together. The first of the day`s activities was meant to be a naval parade on the English embankment near the Bronze Horseman statue at 10:30 am. As such we all agreed to meet there at about 10:15 to watch. 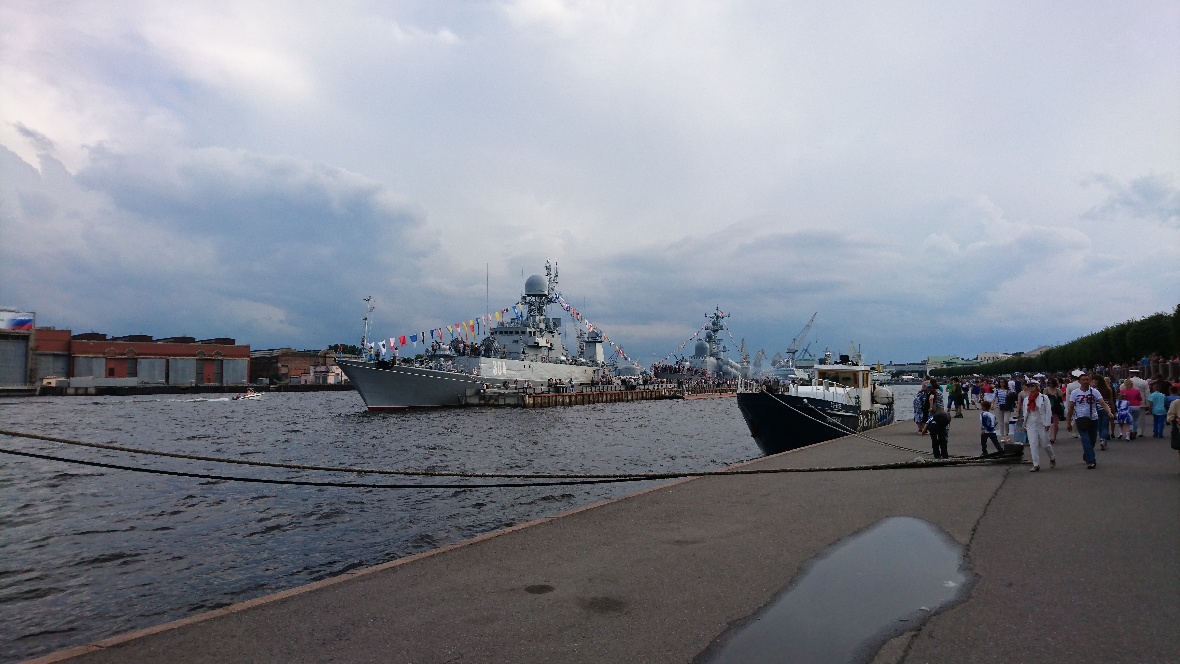 From the moment I left the house it was obvious how different this day was going to be in comparison to other days in St Petersburg. It seemed as if every second or third person was wearing a navy style, blue and white striped t-shirt. The celebratory spirit became even more obvious when I reached the metro. At Technologicheskii institut it was far busier than normal, by the time I reached Admiralteyskaya what had originally seemed simply like an unusually large number of people had grown into something that would be more accurately described by the word sea or flood.
I was carried along by the tide of bodies towards the Bronze Horseman, but when I reached the Alexandrovskii sad which lies in front of the statue I saw that the way forward was closed off by a line of sailors and fences. I moved with the crowd along the barrier, further and further and further until finally, I arrived at road that took me to a spot on the waterfront opposite a submarine and just down from three large cruisers. These, I thought to myself, must be the ships that will be parading. 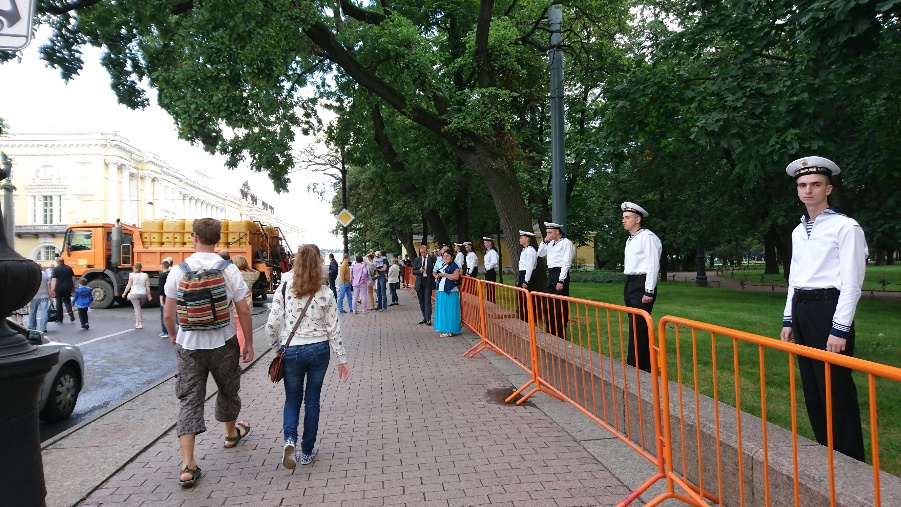 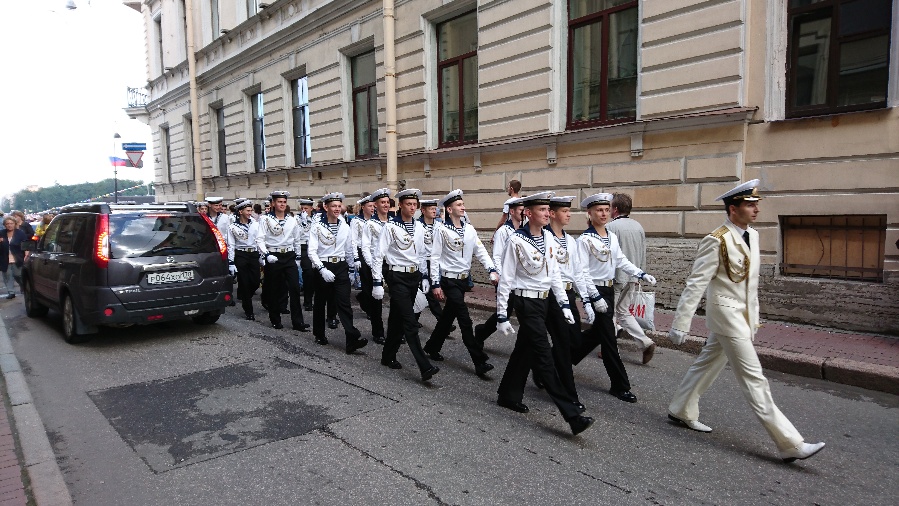 After some improvisation we were all able to meet up near this new spot on the English Embankment and wait for the parade to start. 10:30 came and went. 11:00 came and went. Eventually we heard the sound of the noon gun at the Petro-pavlovskaya fortress. A great expectant cheer rose from the crowd, but still nothing happened. 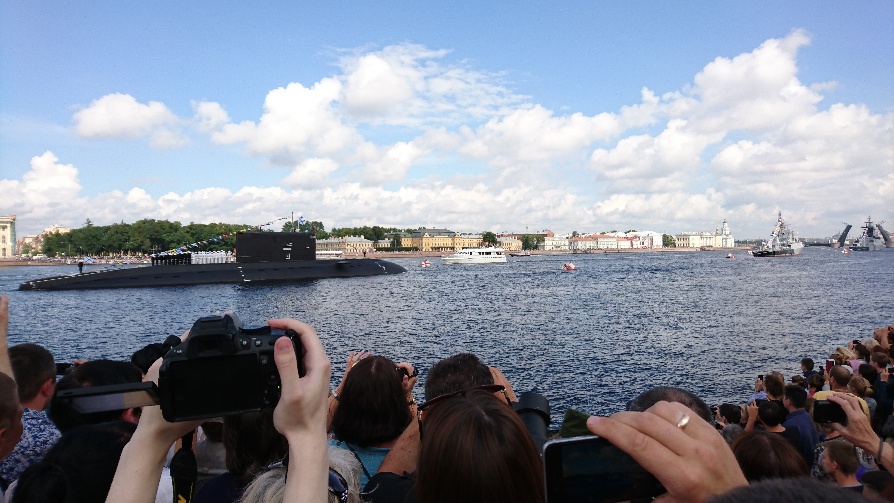 Eventually, maybe ten minutes after the sounding of the noon gun, we saw ships approaching. One large white ship and several small escorts. I`m still not sure whether all of information we received from the Internet was wrong our whether we were simply stood in the wrong place, but for us this white ship and its little friends ended up being the parade. As the white ship slowly sailed by the troops on the decks of the cruisers and the submarine turned to salute the men on-board, that is, several Russian admirals and a certain other person of some importance, whom I`m sure you all know.
As soon as the ship had disappeared from view a few drops of rain began to fall. These few drops quickly became relatively heavy rain and so, now entirely accepting the fact that the ships in front of us weren`t going anywhere, we decided to take cover inside until the worst had passed. Once it had, we made our way down back past the roadblock and towards to Palace square. On the way however, our stomachs convinced us to make a quick stop the Craft Brew Café located, appropriately enough, on Malaya Morskaya Ulitsa. After a quick refuel we carried on towards our target. 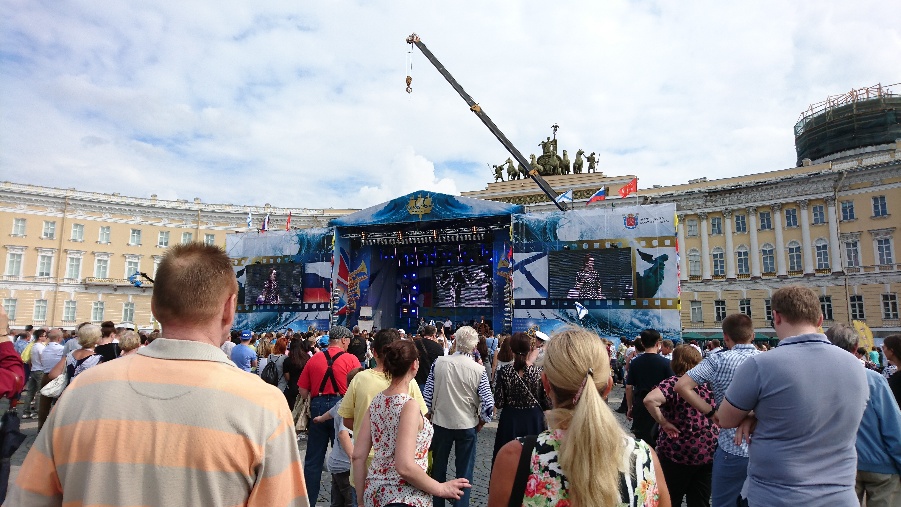 Palace square isn`t exactly a quiet place normally, there are always plenty of people to be found there, but normally the size of the square disguises this fact. On Navy Day, however, the crowds had actually started to fill the square (those of you who`ve been there in person will understand what a feat this is). Just in front of the Grand archway of the General Staff Building a huge stage had been erected,  on which rock bands played in front of huge screens displaying pictures of the crowd and archival videos of Russian and Soviet naval forces.
After a listening to a few songs we decided that it was time to go and visit one of the day`s main attractions, the military ships on University Embankment which were open to public visit. We slowly strolled back to the riverfront and down the banks of the Neva to where the ships were anchored. All the way there the celebrations followed us. While we walked, we saw sailors dancing in fountains, spraying the crowds with water, as well as cheering, flag waving groups marching through the crowds. Eventually we reached university Embankment and a small jetty, alongside which several ships and a submarine were docked. We crossed onto the jetty, found the ship with the shortest queue and joined at the back. Little did we know what was in store for us. 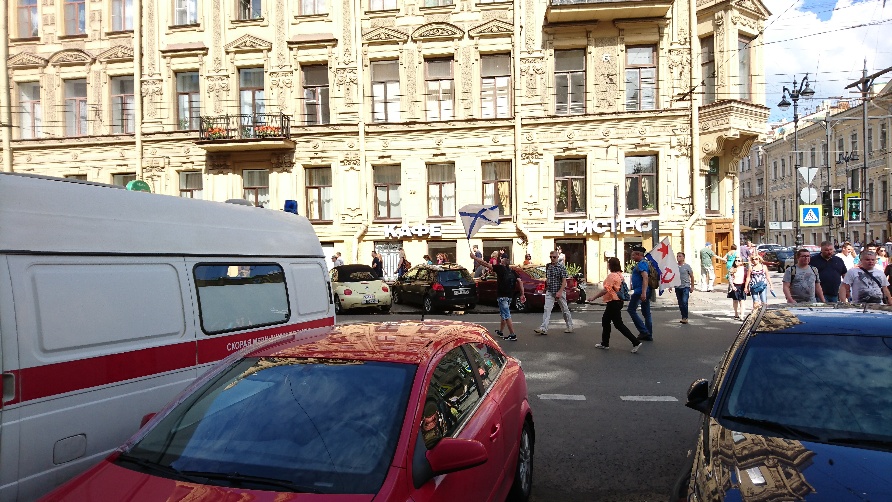 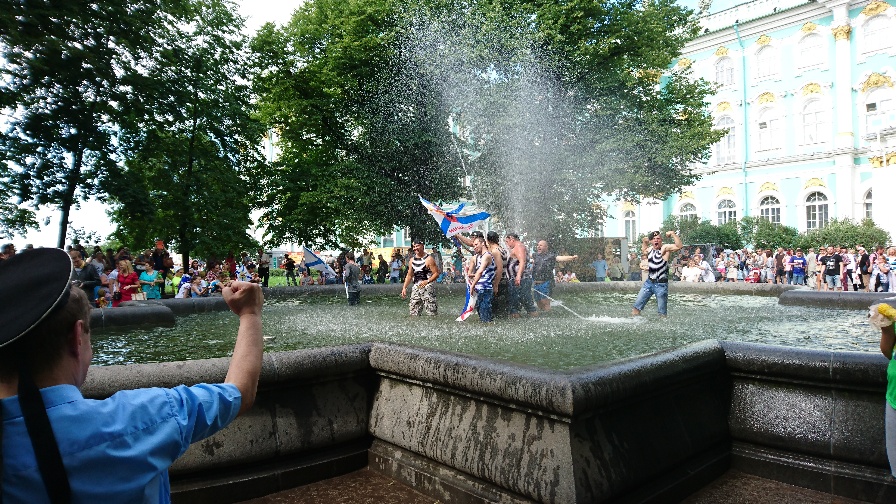 It started silently; the looming shadow of an ominous black cloud drifted slowly overhead, flashes of lightning appeared in the distance, so far away that the thunder could barely be heard. “Maybe we`ll be lucky and it will pass overheard before the rain starts”, we thought. It`s not wise to temp fate, no sooner had the thought had crossed our minds than the heavens opened and the deluge began. We had three umbrellas between five of us, we locked them together to form a shield against the sheets of water falling from above. It was no good. Within 3 seconds my shirt was soaked, within 5 my jeans were too, within 7… well I might as well have jumped in the Neva. 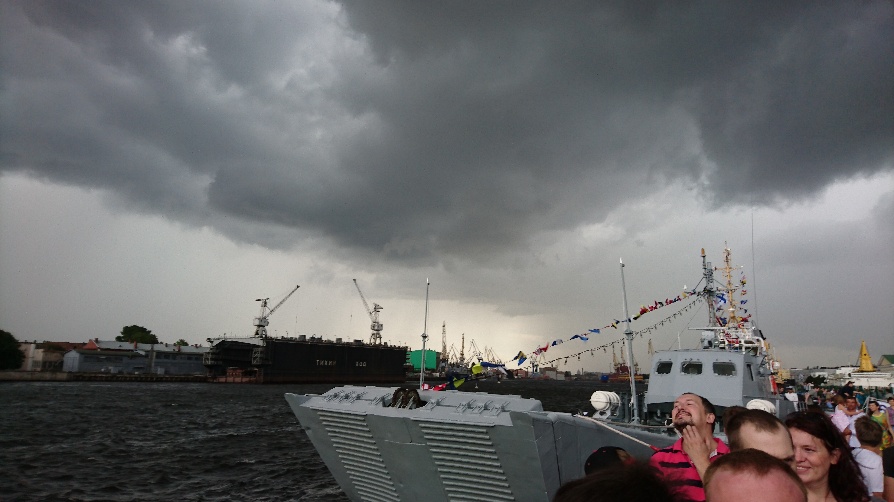 We had nowhere to run, there was no cover nearby and all the cafés on the shore had been occupied the moment the rain began, and so we stood, stranded on the jetty. Eventually, after what felt like an age, the sailors on board the nearest ship took pity on us and opened one of the cabins up as a shelter. We all rushed for the door. In less than a minute the whole cabin was filled with people, and there wasn`t space for everyone… As the metal door of the cabin was swung shut I felt like I was in a disaster movie, we lucky few had been saved, but those who could not get aboard fast enough were left outside to meet their fate. 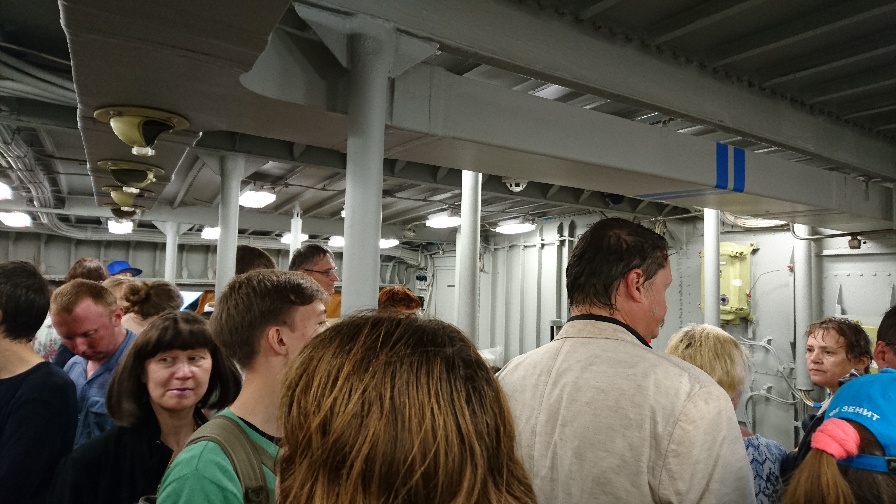 After a rather uncomfortably humid 15 minutes the door to our sanctuary was once again opened. Rain was still failing but lighter now, much lighter. We decided to make a break for it while we still could. We made for the nearest cafe but it was still packed with soaked, bedraggled Peterburgers and tourists. We moved on from café to café, until finally we reached a small Georgian place. The restaurant was pretty cosy and the food was very tasty, which took the sting out of being stuck in soaking wet clothes. Unfortunately the service was very slow, but at least sitting there for over an hour and a half gave us some time to dry out.
Once everything was eaten, drunk and paid for we headed to the nearest metro station, Vasileostrovskaya. From there we headed down to Gostiny Dvor and from there strolled down Nevsky Prospect back, once again, to Palace Square. By the time we reached the square it was already half ten. According to what we`d read online earlier the fireworks were meant to start at 10pm, as such we though we had already missed them. After quick chat with some friendly police officers stood nearby we found out that, much like with the parade earlier, what was written on the Internet wasn`t true. As it turned out we still had a few minutes until the display started. Just enough time to take our places down at the crossroads by the palace bridge, which was of course, flooded by yet another sea of people.
The fireworks were impressive. The different colours, shapes, sizes and types of explosions on display were accompanied not by the “ooo… ah…” noises I`m used to, but rather many voices raised in loud cries of “УРАААА!” and several cries of “слава российскому флоту!”. It would be easier to describe this scene through pictures but unfortunately it was at the point that my phone`s battery finally breathed it`s last, but not before I got at least one semi-decent shot of the show. 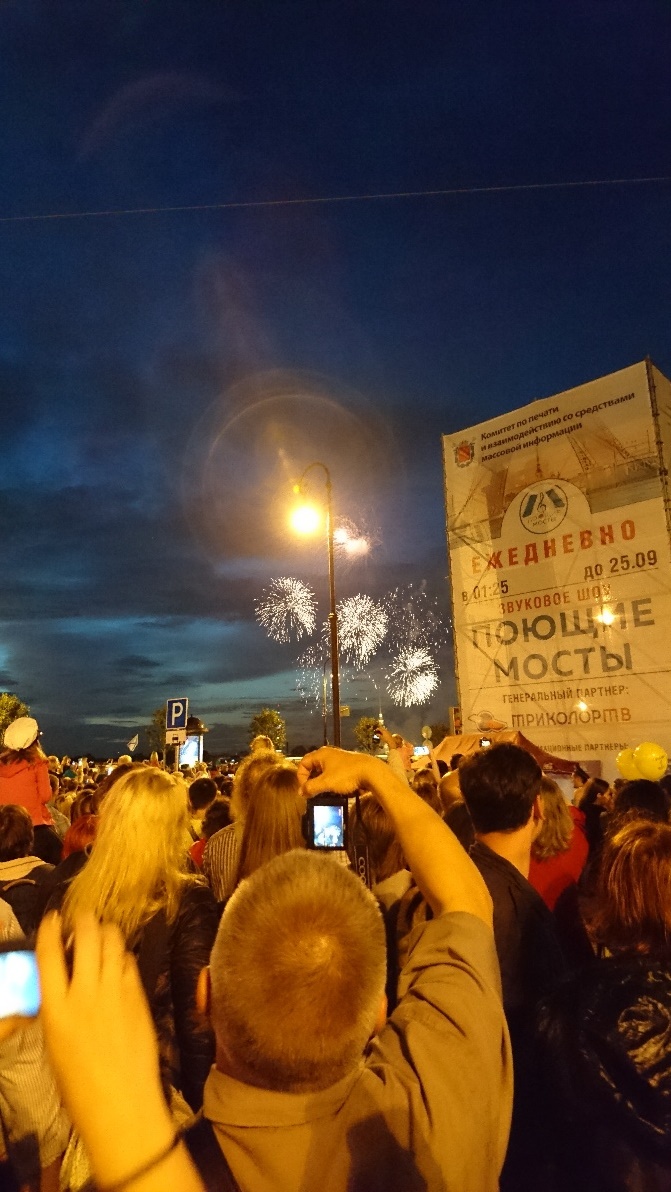